Men coat: what to choose?

Posted on 4 December 2014 by Howtotieatie 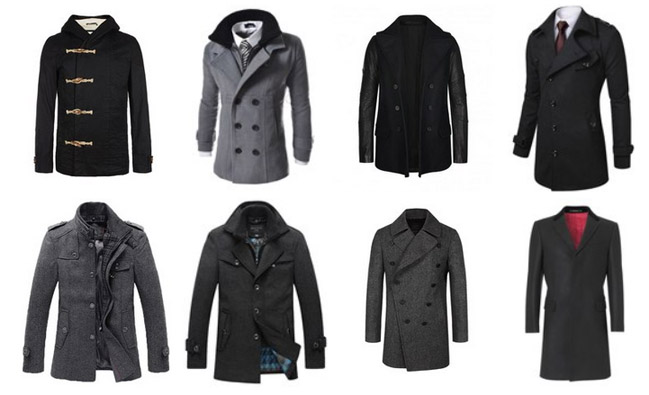 Men coat: what to choose

Men coat: what to choose?

When the warm sunny days give way to chilly and rainy, one of the best friends of the modern man becomes coat. It and work, and for dinner with friends, and a new movie masterpiece art-house, and just walk in the park and poshurshat foliage. Today we tell about the 7 most popular models in the men’s locker room.

Duffle coat.
Duffle coat – the traditional model of a coat, which during World War I fell in love with handsome sailors of the British navy. It consists of a hood, plaid lining, neck strap and wooden buttons, similar to walrus tusks. Previously, they were sewn from thick heavy woolen cloth, which was made in Belgium in Duffel, where, in fact, it’s the name of the native English garment. Duffle coat now make even cashmere and wear with everything under the sun – from classic suits to torn jeans and rough boots.

Jacket.
Another model, inspired by military background – jacket. In the English language is called “Pea Coat”. Again, the sailors of the British Isles gently brought him into fashion. This double-breasted coat above the knee length, with interior motion cozy collar, round shiny buttons and wide lapels that will protect from the weather.

Overcoat.
Army theme evident in his greatcoat, which to this day continues to be created of thick wool. Always double-breasted, form-fitting, with a scattering of large gold buttons, sometimes with shoulder straps, a coat will not all because too authentic and does not fit well with the classic clothing.

Crombie.
Crombie – classic British wardrobe, which appeared for the first time in the range have the same name of the manufacturer. Odnoborotnoe laconic cut coat with a collar and supatnoy clasp. Ideal for creating a harmonious rigorous way.

Chesterfield.
Chesterfield – a modern interpretation of the coat, which with a light hand graph Chesterfield and prudish British tailors became a classic example of British fashion. It is direct, below the knee length, are single or double-breasted, has a hidden zipper, two patch pockets velvet collar and a small pocket on the chest for a handkerchief embroidered with the owner’s initials on it.

Polo.
Polo shirts are not only, but also outerwear, and all thanks again, a British officer who warms, wrapped in it, between the parties polo in colonial India. Later it imperceptibly penetrated into the wardrobe notorious European and American mods: Double-breasted, made of soft wool and ideally – sand shades.

Raglan.
This coat is named in honor of the brave nobleman, Baron Raglan, being dressed in a coat in the famous battle of Waterloo and has shown himself a hero. A distinctive feature – sleeves “raglan” struyaschieysya wave, they go from the neckline to the wrist, no “bag” without providing joints.

This entry was posted in Fashion. Bookmark the permalink.