The Four in Hand knot – How to tie a tie

Posted on 24 November 2013 by Howtotieatie

This node – sometimes even called “node in four”, not without reason, it is also referred to as simple – very easy to get it binds and even among tie news immediately makes an impression. Four-in-hand is definitely multifunctional: in combination with different materials suitable for almost any of fashion collar.

Four-in-hand knot is still “initiating”, which every boy learns from his father. Seeing him even under different names, such as “node Italian” or “knot Old German” – depending on the country that just considered to be the discoverer of this simple binding. Additional advantage: technology binding protects the tie!

It seems that the Four-in-hand – as well as some other node – the node was created from sailing. There are various theories about the origin of the name “Four-in-hand” or “node in four.” When he appeared, were popular carriage drawn by four horses, which fasten the driver reportedly stopped the carriage node.Other sources indicate that the driver wore around her neck scarves knotted identical or that the coach could only lead men in uniform ties. At the same time in London with the same name existed club whose regular customers wore fashionable then long ties with the same node, and through them he gained popularity.

Many proponents of the Four-in-hand for trying to tie a tie as precisely as possible, while for this type of node is characterized by asymmetry! Precisely because it can serve not only as the initiating node, but is also suitable for all those who want to demonstrate their individuality and charm. If for you it is important to be symmetrical knot, you’ll probably happier with a simple knot the Windsor.

The Four in Hand knot – How to tie a tie 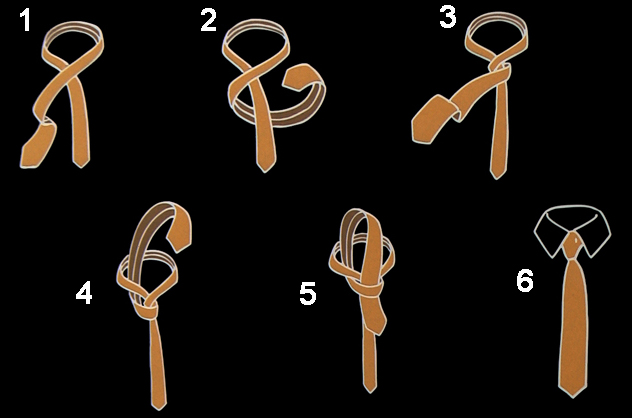 Cross wide end over the narrower side and bring back underneath

Pass wide end across front of narrow once more

Bring wide end up and through centre loop

Finish by tightening knot with care, draw up snug to collar by holding narrow end and sliding knot into place

Regardless of the tie fabric a four-in-hand is often the most appropriate knot for slimmer gents as the width and thickness of your tie knot should always be proportionate to your build along with the spread of your shirt collar. The same goes for wearing skinny ties slimmer tie slimmer knot.

Another case for the four-in-hand applies to those gents who are partial to tying the wider triangular shaped Windsor knot, and come across a tie they cannot live without that falls short of their waistline once tied. While this is most common with taller gents over 6-feet tall one resolution is to commission custom ties to be made of the exact length and width necessary to execute the desired knot. A quicker fix is to sacrifice the girth of the knot and tie a four-in-hand. 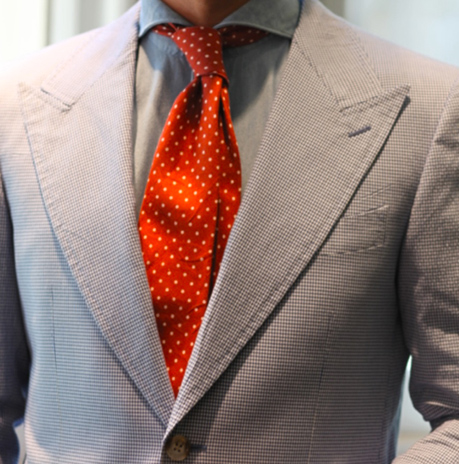 Advantage: It is the easiest to learn among the four most commonly used necktie knots.

Disadvantage: It is asymmetric, which does not look good on wide collar shirts.

It is a small tie knot that suits shirts with a narrow collar opening. It is suitable for most occasions.

This entry was posted in Four in Hand Knot and tagged How to tie a tie. Bookmark the permalink.